The summit kicked-off on Saturday 5 October at the Information Technology Department, Faculty of Engineering, Udayana University. There were around 40 or so students who volunteered to help run the summit. Some of the volunteers were from other institutions. 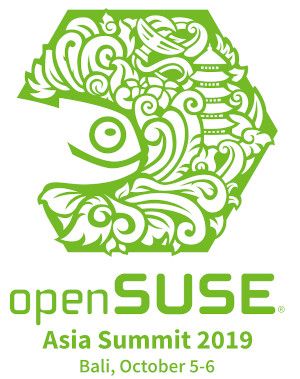 I submitted a workshop proposal on MicroOS and a lightning talk proposal to the openSUSE Asia CFP team. Both were accepted and I couldn't be happier. It gave me the chance to meet friends from the openSUSE community again, learn and share more.

We do not have direct flights to Indonesia. I traveled through Air Mauritius to Kuala Lumpur and then Malaysia Arlines to Denpasar, Bali. I spent almost 24 hours traveling before reaching my hotel in Jimbaran. I was totally knackered when I arrived but the enthusiasm of being there for the summit was stronger than anything.

I booked a taxi through Traveloka ahead of my arrival in Bali. It was recommended by Edwin. When I compared other taxi fares I felt glad I booked it online. I also bought a SIM card on my way to the hotel with a 6GB data package. I knew we'd all communicate mostly on Telegram, just as we did for oSC 2019. My hotel WiFi connection wasn't great but I was impressed by the 4G coverage of my mobile Internet provider, XL Axiata. Mobile connectivity was extremely helpful as I would rely on GoJek car-hailing for the next few days.

The only thing bugging me was about finding vegetarian food. McDonald's, Pizza Hut and KFC were just a few minutes walk from my hotel and along the way there were a few restaurants as well. But those were Seafood restaurants and I felt weird to go there and ask for veggies.

Unlike in Mauritius and Germany, McDonald's and KFC do not offer the vegetarian or vegan burger. I only found two vegetarian pizza options at Pizza Hut, the Veggie Garden and Cheese Deluxe. There might have been some veggie options in the Chinese restaurants but I didn't venture. I visited a supermarket and found that they were selling stuffed croissant. However, there was no clear indication whether they contain tuna, chicken or simply cheese.

Finally, I was saved from the food dilemma by the folks from the openSUSE Asia community. Estu & Ary made sure that there was a vegetarian option during the summit or whenever we went out along with the speakers. I got to eat things other than pizza :) like tofu, tempe, vegetable chop suoy etc.

The summit kicked-off on Saturday 5 October at the Information Technology Department, Faculty of Engineering, Udayana University. There were around 40 or so students who volunteered to help run the summit. Some of the volunteers were from other institutions.

Two students hosted the event with information provided in Indonesian and English. They greeted the attendees and requested everyone to stand for a prayer. Then there was a traditional Balinese dance performance.

After the dance performance attendees were once again requested to stand up and this time for the Indonesian national anthem.

A representative of the university read the keynote speech. He greeted the room by saying "Om Swasti Astu" and then greeted in Arabic, followed by his speech in English.

Indonesia is a Muslim majority country with the Bali province being the only exception whereby Hindus are majority. However, there reigns a peaceful harmony between the two, as far as I could see. There is a mutual respect towards each others rituals and practices.

After the keynote speech, openSUSE Board member Axel Braun did a presentation on the project stats and updates. He then invited the new openSUSE Board Chairman, Gerald Pfeifer on stage.

Gerald impressed the room with his down to earth style as he stressed on the importance of good communication. He also played a video message of the SUSE CEO, Melissa Di Donato who re-affirmed SUSE's commitment to the openSUSE Project.

Then, openSUSE Board member Simon Lees spoke about the future legal structure of the project and the motivation behind. He mentioned the current proposal of registering the project as a foundation and the project name change vote that should run from 10 - 31 Oct 2019.

We had a group photo and then the tea/coffee/snacks break.

Outside the room there were sponsors stands and the conference information desk. But most people gathered to take pictures at the openSUSE backdrop. I took a picture with the Geeko & Gerald.

The organizers conducted some interviews which they showed in a video compilation at the end of the day. Presentations and workshops were happening simultaneously and one could easily find the room numbers from events.o.o and then follow instructions provided by the summit volunteers.

I attended the Kubic presentation by Max Huang in the main hall. In fact, I got the chance to comment on the difference between Tumbleweed & Kubic during the Q&A session.

I even attended some presentations that were in Indonesian, like the Aksara Hanacaraka Bali and Ceph presentations.

My workshop on Managing Pods & Containers was scheduled for the second day of the summit in the afternoon. I spoke about containers obviously but unlike the usual workshops teaching how to spin containers we peeked inside of containers instead to see what they are made of. The aim of the workshop was to educate attendees on Linux namespaces and how they create the isolated environment that enable us to have a distinct Linux instance within another. Then we could delve further into the topic of containers and understand how resources are shared within a pod. That would help a newbie to containers fast-track into the world of Kubernetes. The latter can be intimidating to people new to the idea of containerization with abstractions such as pod, service and deployment.

My friend @IshSookun give workshop about @openSUSE MicroOS in #oSAS19 pic.twitter.com/VAQdhHh49J

openSUSE MicroOS is perfect to start experimenting with containers and pods, then exporting those pods to Kubic (the Kubernetes distribution of openSUSE).

On the second day of the summit I also attended several other presentations, like the talk on the future of the desktop by Neil McGovern, Executive Director of the GNOME foundation, the auto-deployment of Ceph with Rook on Kubic by Saputro Aryulianto and openSUSE deployment on Linode using Terraform by Muhammad Dhenandi Putra.

The last item on day 2 was lightning talks. I had five minutes max to talk about the subject that I had submitted. I wanted to explain the election process within the openSUSE community, like the software used, planning by the Election Committee etc. Then, I also highlighted that for one to be able to vote in any openSUSE election or run as candidate for the board, the person needs to be an openSUSE member.

@IshSookun talks about the three steps someone needs to take to become an @openSUSE member. Just click on it - https://t.co/YQqJFISd4N pic.twitter.com/pYHw6TMUjw

Becoming an openSUSE member requires a few steps, three to be precise. That's it, I completed the talk within the five minutes and invited the forty or so summit volunteers to apply for openSUSE membership.

openSUSE Asia Summit 2020 will be held at the Manav Rachna Institute of Research & Studies, Faridabab, Haryana, India. I'm looking forward to that and hopefully if all is good perhaps I will attend with more friends from Mauritius.

After the summit, the next day, the organizers planned a Bali tour which was awesome. I will blog about the places we visited in separate posts.