Where is the Freedom of Information Act?

At just a two weeks before the General Elections in Mauritius, I am pondering over the achievements of the outgoing government. A renewed alliance between the MSM Party and Muvman Liberater is asking the citizens to give them another mandate to run the country.

At this stage I thought I should check their Electoral Manisfesto of 2014 to see where do they stand on their promises.

One particular area I am interested in is Good Governance. I am looking for what happened to the promised Freedom of Information Act (FOIA), to be more precise.

Yes, they promised a Freedom of Information Act to guarantee transparency. A counter was subsequently published by lexpress.mu which now shows that it's been 1779 days since L'Alliance Lepep formed a government and yet there is no sign of FOIA.

I attended two workshops on the subject of FOIA, one organized by the U.S Embassy in 2015 and another by the Mauritius Council of Social Service (MACOSS) in early 2016.

I never received an invitation to participate in any FOIA related workshop by government led initiatives (if they happened in the last five years).

Five years and freedom of information is not guaranteed.

Among the ten items on Good Governance in the Electoral Manisfesto of 2014 key ones have not been fulfilled. Item number four talks about freedom of opinion and that citizens would be free to attend public gatherings, participate in pacific protests, etc.

However, the outgoing government only made the ICT Act more stringent and confusing that the citizens of Mauritius somehow lost their "freedom of expression" on the Internet. Find more about that in the following articles: 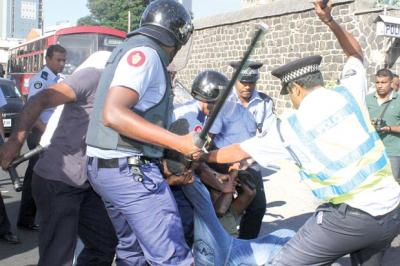 Lastly, regarding the freedom to attend public gatherings or participate in pacific protests, can we forget the harsh treatment of Rastafaris in 2016?

Several people were arrested and some were brutalised by the police.

This blog post is not an endorsement of whom to vote or not to vote but simply portrays the thoughts of an ordinary citizen.
MauritiusElections